Gill Watson
I have a book to publish. Editors love it, marketing departments say 'up the media profile'. So here I am 'upping it' and writing about the book, food, and life in general.

Edgware Rd edibles and the time we mistook someone's garden for a restaurant.

So, we missed the fireworks at Buck Palace because we nipped out from the Hilton's 23rd floor bar (perfect view of the concert) to grab a bite to eat at Maroush Express on the Edgware Rd.  Click on the link and you'll understand why we didn't get back to the Hilton.  Not because the service was slow but because it was so damned good and there were just so many amazing things to eat  and they had Bekka Valley red wine.  Which I drank even though I had said, 'Never again.' after I had floated my liver while trying to get to the flotilla the day before.

We had passed about a thousand men puffing on shisha pipes as we'd made our way to Maroush and we were the only non-Arabs eating there which certainly added to the feeling of being a thousand miles away from Buckingham Palace.  A proper foreign holiday without stepping on a plane.  And with more rain. Zoe asked, "Is this a Turkish restaurant?"

"No darling, it's Lebanese but some of the cooking is very similar.  Remember when we went to Turkey a few years ago?"

Zoe looked vague; I guessed she probably had a picture of Marrakesh in her head.  "Turkey was the one where we demanded food from that poor boy whose garden we mistook for a restaurant."

Yes, in one of my more embarrassing holiday moments I had dragged everyone away from our all-inclusive hotel to find some authentic Turkish cuisine.  Clever me spotted a little garden at the end of an alley.  It had three red plastic tables with faded coca-cola umbrellas and a few mis-matched plastic chairs.  "This will be good," said I "follow me."

We sat at a table waiting for a waiter.  Ten minutes passed.  An old man looked over the wall from the next garden then came round and knocked on the door of our garden 'cafe'.  An old woman came to the door.  The man pointed to us.  The old woman brought out a young man.  He came over to our table and asked, "Can I help you?"

The boy looked a bit puzzled.  I thought hashish was probably to blame.  "A menu?" asked dopey.

"Okaaay," said the boy and promptly jumped on a motorbike and sped off.

We sat for a while wondering what the hell was going on but feeling too embarrassed to leave.

The boy returned ten minutes later with a menu as long as his arm.  We chose our food and drinks and what do you know?  Our waiter boy jumped back on the bike and set off again. It was nearly an hour before he re-appeared in the alley, trying to balance a huge cardboard box while steering his bike with one hand.  The old woman came out with an assortment of plates and forks and the box was opened to reveal our order.

Ged said, "Oh Christ Gill.  I think we must be sitting in someone's private garden.  It's not a restaurant at all."

He was right.The lovely boy had been too nice to say, "Get off my land" and instead had driven off to a neighbouring restaurant to provide us with our dinner.  We left a very big tip.  And didn't ask to see the dessert menu.

In honour of Arabesque food I made an Egyptian pizza today.  It's yummy and easier than it looks.  Give it a go. 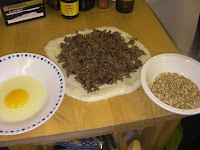 Firstly, mix up some of that supermarket pizza dough.  It may be cheating but it's easy and it works.  When it's proved, roll out a circle and scatter with a fried up mixture of finely chopped onions, garlic and minced lamb.  Sprinkle with salt, cinnamon powder and toasted pine nuts. 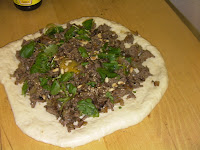 Crack an egg on top then sprinkle with chopped parsley.
Yes, I know that's watercress in the picture but I had forgotten to buy the parsley. 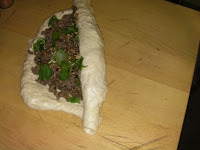 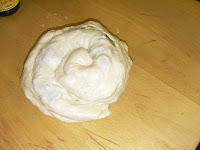 Roll up the pizza into a big sausage shape.


Roll the sausage shape into a spiral then, with a well floured rolling pin carefully roll to flatten slightly.  DO NOT PANIC IF IT BURSTS ITS SEAMS A BIT. 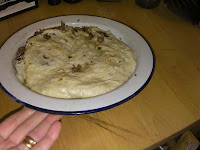 This one did.  Heat a frying pan with a little olive oil and carefully slide the pizza into it.  Fry until golden brown then flip it over to fry the other side.  I forgot to take a picture of the frying pan. 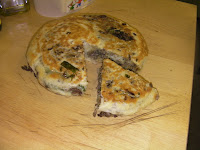 Sprinkle with a bit more cinnamon, slice and serve with the rest of that watercress.

And finally, referring to April's Hilton blog we had very few things to moan about while staying at the Hilton London Met.  Yes, reception looked like a badly designed airport but then we knew to expect that.  The room was great, breakfast was amazing, the views from the 23rd floor bar outstanding.  And then there was the pool which was cold and tiny and had changing rooms only big enough for 6 people.  AND it is no longer possible to buy a stamp because, the manager said,they were not making enough money from them?!
Posted by Gill Watson at 21:10

EATING MY WORDS by Gill Watson

The mad but true story of Gill's time working as a private chef for, amongst others, a Hollywood A lister and a (possible) arms dealer.
"It is witty and sharp and fun and funny - a great picture of late 90s London with its thriving gay scene, the political turmoil of Jill Dando's murder and the bombings. . . the voice is great. The book is such a breath of fresh air."
Rebecca Saunders, Little Brown
"I'm loving this!" Sarah Emsley, Headline
"What colossal fun it is! I so enjoyed EATING MY WORDS and I absolutely loved Gill, her sense of humour and her general liveliness. . . the book is fabulous and the author clearly the same." Sally Gaminara, Transworld
"I enjoyed this a lot and her food sounds so yummy."
Rosemary Davidson, Random House