Gill Watson
I have a book to publish. Editors love it, marketing departments say 'up the media profile'. So here I am 'upping it' and writing about the book, food, and life in general.

Cicchetti's in Piccadilly, you lucky Londoners

Time to talk a bit about food before I bugger off to bed.  We fly to Corfu in the morning in spite of LowCostHolidays.com's attempts to sabotage the trip - including removing my name from the airline passenger list 'by mistake'.  Yeah right.

We've been doing a bit of eating out over the last few weeks but I've had little chance to blog about it.

Firstly, I noticed when we were in London for the Jubilee that San Carlo Cicchetti's was due to open on 21st July at Piccadilly.  Ooh that was yesterday!  It's not often that London follows what we do up here but SC's Cicchetti's have been smouldering beneath House of Fraser in Manchester for some time now and the food is truly fabulous.  As is the bar and the sexy waitresses.  Little Venetian titbits (is titbits a word?).  All delicious.

And then, even though I would rather not admit to it, we did Red Hot World.  We first noticed this place when we were driving through Manchester early one Saturday evening.  We thought we were witnessing a riot on the streets (as Morrissey would say) but the crowds were actually queuing for this peculiar world buffet which  the kids will love and the parents will tolerate because the kids are happy.  Actually the food is fine; staple buffet Chinese, not so great sushi, great looking Indian (which I had to avoid because of the turmeric allergy) and a dessert section which looks the dogs bollocks and on the whole tastes like it.

I'll tell you what is the most interesting thing about Red Hot World and that's the anthropological exercise of observing how differently the nations of the world choose to eat when faced with a massive selection of round-the-world-foods.  In general the white British stuck to pastas, carvery and puds but every Japanese person there (and there was a surprisingly large number of them) had the most enormous plate of fresh fruit.  All of them.  And they piled it up before they ate their main course as if paranoid that the rest of the punters would nab it.  As if!

Lastly, for this blog post, we did the Foodies Festival (I find I now cringe at the term 'foodie') at Tatton Park which was actually quite enjoyable.  The lovely, entertaining Charles Metcalfe took us around the Med talking wines.  I would quite like a mini-me Metcalfe in my pocket at all times.

We had Bhel Puri (which I always thought was some kind of facial paralysis) from Chaat Cart who get my vote because there was no turmeric in the spicy rice crispy concoction.  Here's a pic of their recipe for it.

Then there were the curious chimney cakes which were a yeast dough, layered with butter, rolled and wrapped around a hollow metal cylinder and then cooked infront of one of those donner kebab type things.

And that's it really for now.  Sweetie the cockateil has gone to a newly opened pet hotel for the week.  We can watch him 24 hours a day by 'petcam' ap.  The owner has strict instructions to stuff him and keep moving him around all week if he pegs it.  The last thing I need is Zoe insisting we fly home after 2 days because the bloody bird's died.

At a family party this weekend I was told off for not blogging enough.  My niece, (grown-up niece, that is) said she has a friend who has a job and two kids and still manages to blog every day.

Well I bloody well can't.  It's not that I don't have anything to say but I absolutely do not have the time.  It's now 10.45pm and Ged and I are still an hour away from eating as I've buggered up the BT connection at his shop while trying to e-mail my column to Northern Life (a day over deadline).  Then, when we've finally eaten I need to pack for Alton Towers.  That's pack for rain, sun, hail and wasp attack.  I never go anywhere without Piriton.

I'd had this fabulous idea that we would book our only day off school this year to take the kids to Alton Towers as a super special treat.  I had Tesco vouchers to pay for all of us and there would be no-one there because everyone else was at school.  Then I noticed  a remark on Facebook about Alton Towers being a bit busy as the high schools were taking pupils there as an end of term treat.  Oh joy.   Guess how many people are expected tomorrow?  16,000.  Yes that's SIXTEEN THOUSAND people.  If I had time I would cry.

I also need to tell all of you out there who kindly crossed their fingers and toes for Zoe, that unfortunately she didn't get through to the TV stage of Junior Masterchef.  I suspected all along that she may have trouble on two counts;

1)  The JM team asked Zoe how long it took her to make her trio of desserts and she said three and a half hours.  What she forgot to say was that the reason it took so long was because the oranges and lemons for the Sephardic cake had to boil for 3 hours!

2)  I had suggested, at the last minute, that Zoe serve her accompanying crème fraiche in a brandy snap basket instead of a bowl.  I gave her the recipe and she made a perfect basket.  The trouble was that she had only made it the once and when she was asked to describe how she made it to the JM team she sort of, well . . . forgot.  She knew she had baked it in the oven but forgot the preliminaries of mixing the flour, butter etc in a pan.

I suspect the JM people thought that I had made it all which is a great compliment but not true.  I have to admit to feeling ever so enormously relieved that we don't have to spend the next few weeks cooking every ridiculous item in Larousse Gastronomique.  I have given Zoe the option of proper training ready for next year but I suspect she may decide to give it a rest.  We'll see.

How many bottles of wine does it take to feed a family for a week? Five . . .

Two weeks ago our local paper reported that families were starving in my home town.  Some children were going to school with nothing more than a slice of bread or a couple of biscuits in their packed lunch boxes.  A local church was asking for food donations to help out the desperate.  I decided to tackle Ged-the-husband about it.

"Darling, we have to give up drinking wine on school nights."  I could see the fear in Ged's eyes.  I could see my fear in Ged's eyes.  The idea of not sharing a bottle of wine over dinner every night was very scary.  We were having this discussion at 9.20am but the thought of not drinking wine that evening was making me desperate for an immediate shot of alcohol.  Did that mean I was an alcoholic?  Probably.

"Think of the benefits Ged.  We'll be slimmer, healthier, our skin will glow, we won't get wrinkles, we'll have boundless energy . . ."  I believed some of it but not all.  I've spent years convincing myself that the wine I drink cuts through all the fat I eat and sort of breaks it down so I can wee it out, no harm done.

For the first two days of our abstinence I  could think of little else other than my neeeed for a glass of wine.  I don't know if it was physical or psychological but the craving was impossible to ignore.  But we did it and this is what five days of no wine bought - yes, a whole bootful of food.  That's only £25. 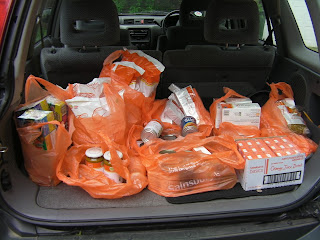 I've been telling just about everyone I meet about the starving families because I've got a big mouth and I can't help it.  My big mouth is a blessing and a curse.  It means well but is often misunderstood.

The average response is, "The government provide enough money. These parents must be spending it all on booze and fags instead of feeding their children."

I'm sure in some cases the parents may drink and smoke but if children are starving then they have to be fed by someone.  Most families are struggling because there is no work, housing benefit has been cut and they have to spend their meagre government handout on topping up their rent and paying fuel bills.  Even if they don't put the heating on they still need to pay for lighting and hot water.

700,000 parents who work and claim Family Tax Credit are still living beneath the poverty line. Their children are not entitled to free school meals and it's not bloody fair.

If anyone feels they can help in any way please contact the lovely Suzanne Waddicor at the Grassroots Centre.

Two weeks down the line we are still waiting for the boundless energy and glowing skin etc but I'm sure it will come, all in good time.

EATING MY WORDS by Gill Watson

The mad but true story of Gill's time working as a private chef for, amongst others, a Hollywood A lister and a (possible) arms dealer.
"It is witty and sharp and fun and funny - a great picture of late 90s London with its thriving gay scene, the political turmoil of Jill Dando's murder and the bombings. . . the voice is great. The book is such a breath of fresh air."
Rebecca Saunders, Little Brown
"I'm loving this!" Sarah Emsley, Headline
"What colossal fun it is! I so enjoyed EATING MY WORDS and I absolutely loved Gill, her sense of humour and her general liveliness. . . the book is fabulous and the author clearly the same." Sally Gaminara, Transworld
"I enjoyed this a lot and her food sounds so yummy."
Rosemary Davidson, Random House